Working Harder For You

Complementary to the impressive standard specifications, the eDeliver9 boasts equally impressive performance specs accredited to its 150Kw / 310Nm motor partnered with either a 51.5Kwh, 72Kwh or 88.55 Kwh battery configuration which produces a WLTP city range of up to 353 kms and a fast charge of 80% in 40 minutes. 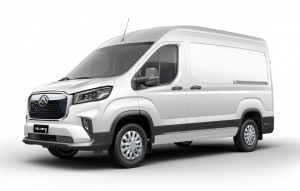 There’s a short wheel base for when you don’t need additional load capacity, but with a cargo volume of 9.66m3 it’s certainly capable of meeting most needs. 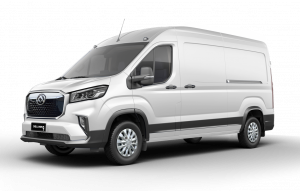 When the job calls for additional length without extra height, there is the long wheel base mid roof van holding 10.97m3. A popular mid-range van. 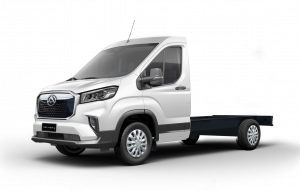 Build it how you like to suit your needs.  The options are endless.  Designed for comfort, not just pulling power, it’s packed with advanced safety features and all the latest tech to take your office on the road.

The eDeliver 9 provides a smooth, quiet ride while still bringing the grunt to handle your toughest days on the road.

SAIC are the leaders in the technical revolution, continually leading the way in the development of new technology and solutions for the automotive industry.

A part of that revolution is being the market leaders in battery technology, we have developed a number of battery options for the eDeliver9, by using various battery cooling methods, which allows us to reduce charging time (DC 45mins (5%-80%) AC 5hrs), extend battery life and increase the operating range. 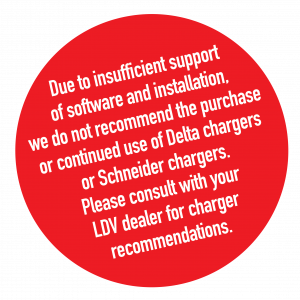 With plenty of space and support, the eDeliver 9 is built to help you handle long days on the road….

The eDeliver9 offers eight adjustable driver seat options ranging from standard to comfort, with added lumbar support and armrest. Seating covers are built for comfort and durability and come in knit/grey heavy duty, hard-wearing fabric.  And when it comes to visibility, LDV’s front fog and daytime running lights ensure you are seen in any light.

The eDeliver9 offers a pure driving experience that any van driver will appreciate. Professional drivers have busy and often long days, and this is why the eDeliver9 cabin area offers all the comfort and practicality of a mobile office space.

Packed with cutting-edge technology and practical features, you’ll have everything you need and all operated at the touch of a button on a 10 inch touch screen with Apple CarPlay™. In addition to radio and navigation functions, the high spec includes USB ports for both the driver and passenger, so you can always remain connected whether by laptop or by simply hooking up your smartphone to the system. A ready-to-go mobile office space. Use mirror link to access all your apps and emails.

The eDeliver 9 is a large van built to make carrying loads easy. Its wide opening single side-sliding door make loading safer and faster while the rear barn doors open to 180° for loading with a forklift or at a dock.

eDeliver 9 also has the added benefit of a low floor clearance with built in rear step delivering increased load capacity as well as easier loading.

The Reassurance of Roadside Assistance

LDV Roadside Assist supports you and your vehicle for the period of your manufacturer’s warranty, 24 hours a day, 7 days a week, 365 days a year.

Occupant safety is paramount in the eDeliver9 with six air-bags as standard, side & window curtain airbags in addition to driver and passenger front airbags.

Reverse parking sensors are standard fitment on eDeliver9.  The high mounted reversing camera with on-screen guidelines in addition to front and rear parking sensors increase visibility and ensure safer parking (not included in the cab-chassis model).

Here you will find the details but please fee free to contact us for further information.

Made by Trinity Designs